"As rich an experience as life itself, so full of subtext, themes and messages"

"You'll laugh, you'll cry, you'll count your blessings. We should make more films like this"

David Stratton, At The Movies

* * * *
"A beautifully made snap shot of contemporary Australia ...There should be more Australian films made like this one"

* * * *
"A refreshingly honest and compassionate film"

"An appealing fable of shattered illusions"

"A powerful film that resonates long after the final credits have rolled. THREE DOLLARS encourages you to scrutinize your own beliefs"

"This is the film Australia has been waiting for: a thoroughly, absolutely credible check on how we now live as a nation"

"I have seen nothing finer from Wenham. His Eddie has astonishing depth and sensitivity. This is a film of profound and troubling ideas, with many scenes of heartrending power... A drama of conscience, raising important questions of contemporary politics and public morality... The film can be taken as a sorrowful critique of the unfeeling market forces that rule our lives and as a touching study of friendship and survival"

"Robert Connolly is a natural master of film... A fascinating work, filled with little treasures of observation, performance and technique... Engaging and a pleasure to watch"

* * * *
"THREE DOLLARS is easily the best Australian film this year"

"I can't think of an Australian film which has captured marital happiness so truthfully ... wit as well as warmth"

"Wenham's performance, a subtle blend of resilience and quiet desperation, is one of his best... Not since Lantana has a film taken us so far into the headspace of an Australian man"

"A powerful film that resonates long after the final credits have rolled... THREE DOLLARS encourages you to scrutinize your own beliefs"

"One of the best Australian films yet made"

* * * *
"A cut above the rest... A brave movie that will strike a chord with couples everywhere.. A sure bet for AFI glory come November"

"Could be the best film produced in Australia this year. A story worthy of a nation's rapture" 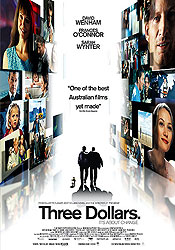