"Campion makes a spectacular feature-film debut with Sweetie, a movie unlike any other you're likely to see until the next Jane Campion comes along. possesses remarkable strength and tenacity. It demands that it be taken on its own spare terms without regard to the sentimental conventions of other movies"

"Sweetie, the first feature by Jane Campion is a moody, frightening, savagely funny and unclassifiable portrait of a disturbed family - a great film."

"Sweetie is an original, audacious tragicomedy, a refreshing, exciting debut from an obviously talented director"

"Campion has a distinctive vision, a great sense of humour and the assurance of a committed film-maker. Sweetie is a great start."

"Funny and shocking,ridiculous and sublime, a true original"

"One of the freshest, most exciting first features to appear in a very long time."

"Remarkable.moving to audiences of any persuasion" 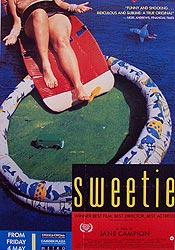